I love drawing maps. As a kid I drew pirate maps on old brown grocery bags, burning the edges to make them look old (with Mom’s help). In geography class, I lived for the feel of onionskin tracing paper, and the traced and coloured maps we were assigned. I had great fun recently making an updated map for Elizabeth Ann Scarborough’s Seashell Archives series. And at last I get to make one for my own world, the world of Mermaid Music.

I’ve had the shape of what the world looks like, or at least Sami’s little corner of it, in my mind for some time. Those familiar with the area around the west coast border of British Columbia and Washington State may recognize some influences here, though I’ve kept it very loose (I didn’t even look at a map because I didn’t want to get too close). My concept of the islands trade and the voyage The Mermaid will be taking grew out of the landscape of my home, on what we call the Salish Sea, which includes all the straits, sounds, and bays between our islands and the mainland, so it seemed a natural place to start. 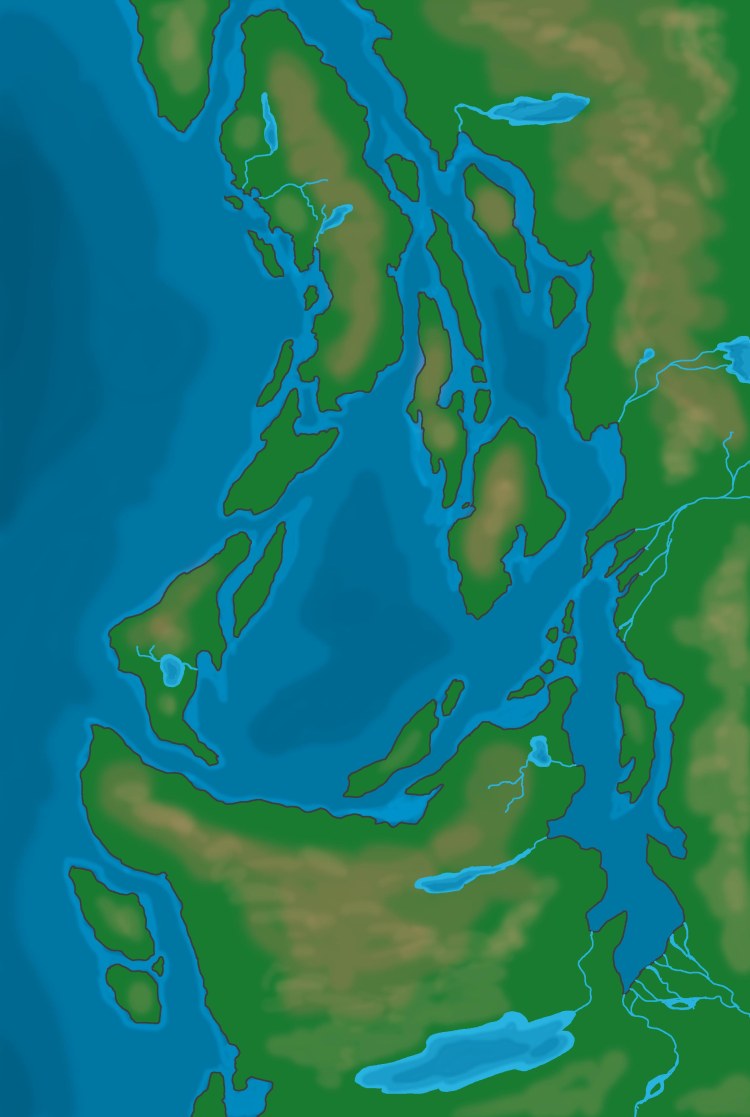 This drawing was entirely made in Photoshop, based on a pencil sketch. There’s still a lot of work to do, to give the land some more form, add place-names, a compass, and maybe a couple of “here there be dragons” kind of things!

This drawing is a work in progress of the area where the next bit of the story will take place, or at least start. The Mermaid and her crew will be heading even further south, and I’ll expand the map as we go. As for names, I have a few, though the map is only roughed in, so I haven’t written them in yet. I’ll present a more finished version soon. (UPDATE: there is now a “map” tab in the top menu bar!)

Sami’s home is the island near the top with the two lakes. The little round bay on the west side of the island (assume standard map directions) where the two rivers come to the sea is Moon Bay, where the action so far has been taking place. 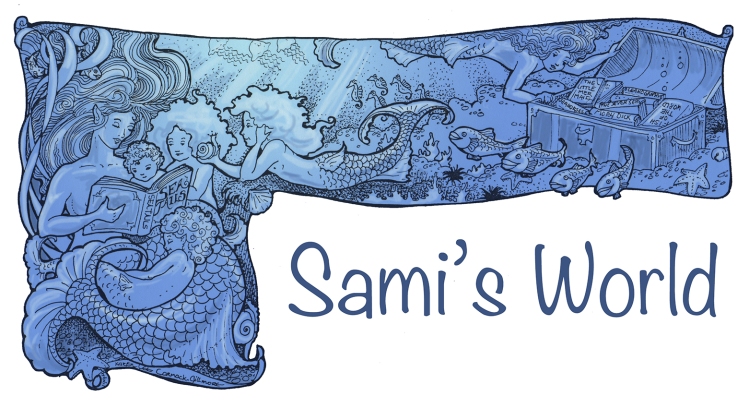 Every story needs a backstory, and I’ve given a lot of thought (some might say too much!) to what kind of world Sami, Aunt Root, and the Mermaid’s crew live in. As the plot has progressed, the world has revealed itself as well, sometimes in conflict with what I originally thought it would be like. As we journey with our characters, more will be revealed, but for now, I feel safe in presenting this bit of historical background of the world above the waves (we’ll get to the merfolk culture a bit later!).

The world of Mermaid Music is in some ways much like ours, but in some ways very different, at least from where we are now in our own history. At some point in the past there was foreseen a general collapse of a world-wide civilization due to environmental causes and overpopulation, if things continued as they were. Fortunately, there was enough warning, and due to the efforts of a few wise leaders, the population of the whole world embarked on a gargantuan project to avert the disaster.

A new cultural paradigm led to a drastic reduction in the birthrate, and every effort was made to study ways that people could work with nature, rather than against it (much like our concept of permaculture), and to educate every person in their implementation. This mitigated the worst of the impact on the human population, though for a while, they struggled with new diseases, hunger, and a collective, debilitating guilt that they had caused such severe damage to their world. The biological sciences ascended to prime importance during this time, and many experiments were made in an effort to preserve enough diversity to keep the planet’s ecosystems from total, irretrievable collapse. Some of the achievements will look very close to magic to our eyes, but as has been said, “one man’s magic is another man’s technology”!

However, all these efforts were not enough to forestall the rising of the seas due to the melting of the ice caps. Many lands were drowned, and the continents reduced, with chains of large islands where coastal mountain ranges had been. Huge storms and earthquakes caused by the redistribution of the seas’ weight further reduced the population and changed the landscape. Complete chaos was only averted by the fact that care had been taken to maintain a world-wide communications network, and caches of all human knowledge.

At last, the Earth settled, and the present, much reduced population lives in a calmer time; people make their livings in ways that look familiar to us, like farming, fishing, shipping, trade, and the arts. Because the population was once much more mobile, people have mingled to the point where most are some shade of brown, and racial tension is a thing of the past. Both women and men do any job that they feel an aptitude for; in the days of population reduction, all hands were needed, and any division of gendered work-roles fell by the wayside. They are also very sensible about relationships, and many varieties of partnerships and family units exist in harmony. But as utopian as this sounds, people will be people, and conflicts do arise; these are dealt with in various ways by the local populations, with greater and lesser degrees of success.

The technology level appears on the surface to be roughly equivalent to our 19th century, but only because people have chosen to eschew some of the more damaging sources of power that were used in the past, being wary of synthetic materials and processes which might cause damage to their environment. They do use wind, tides, and geothermal power, and have perfected extremely efficient solar power, and even use some steam power created by using alcohol-burning boilers, but these are regarded as somewhat suspect, as skirting too close to the old ways, not to mention using up perfectly good crops to produce it. There is some experimentation with solar power to produce steam to drive large ships, which looks promising. Horses and other animals are used on farms and for land travel. Most goods are made by skilled craftspeople, as mass-produced goods are regarded as shoddy and lacking a certain spiritual essence.

Most sea traffic is done by small, family or cooperatively-owned sailing ships along the coasts and among the islands where Sami lives. There are great solar-engine-powered ships, more like floating nomadic colonies, with the ability to extract drinking water from sea water, and these are used for longer explorations. Sailors and the owners of ships nominally belong to a shipping guild, which resolves problems and disputes involving shipping and commerce, but training and certification are left to the individual families and cooperatives.

Commerce is mainly in goods and services, though there are ways of tallying credit; people have a mistrust of portable money as a means of exchange going back to the collapse. Some places use a system of art objects as a means of portable exchange; the value of the objects is not fixed, but is negotiated with each exchange.

In a way, this is a post-apocalyptic story, but instead of the usual dark and gritty outcome, in this world people have managed to pull it together. It’s a world that I would like to live in and explore, and I welcome you along for the voyage!

(The drawing at the top is one I did many years ago for a short-lived mermaid magazine that some friends were doing. I added some colour to the original pen-and-ink in Photoshop, just because I can!)

Hello faithful followers! Friday’s post marked the conclusion of Chapter One of Mermaid Music. I’m going to take a brief interlude to regroup, but will continue to post goodies in the form of blog posts about the world of Mermaid Music: maps, some history, character studies, maybe even some sneak peeks and views of my process.

I plan to resume the story at the beginning of August; as the first Monday is the 3rd, that will be the date I am aiming for. In the meantime, I’ll be scripting, drawing, inking, and painting to take us into the next phase of Sami’s adventures. I’ll also be working out the best ways to make it possible for online sales of the comic, as well as art, and who knows what all else I’ll come up with! Who wants mermaid t-shirts? 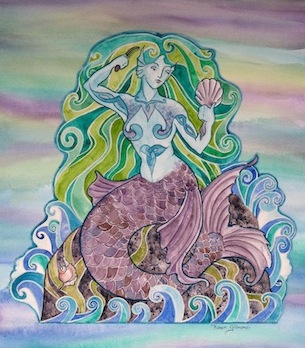 Elemental Mermaid (water element, from a series of the four elements); watercolour and collage 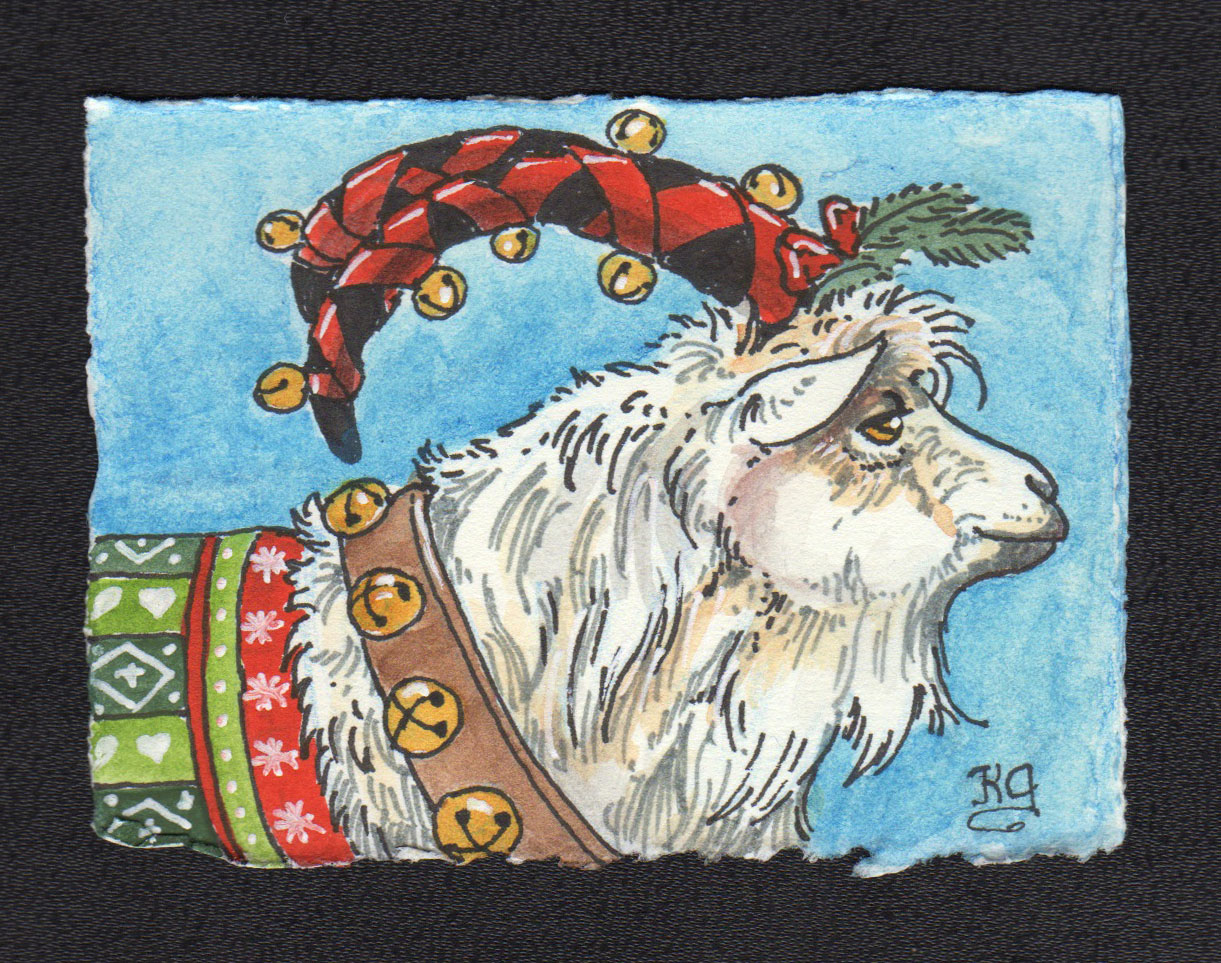 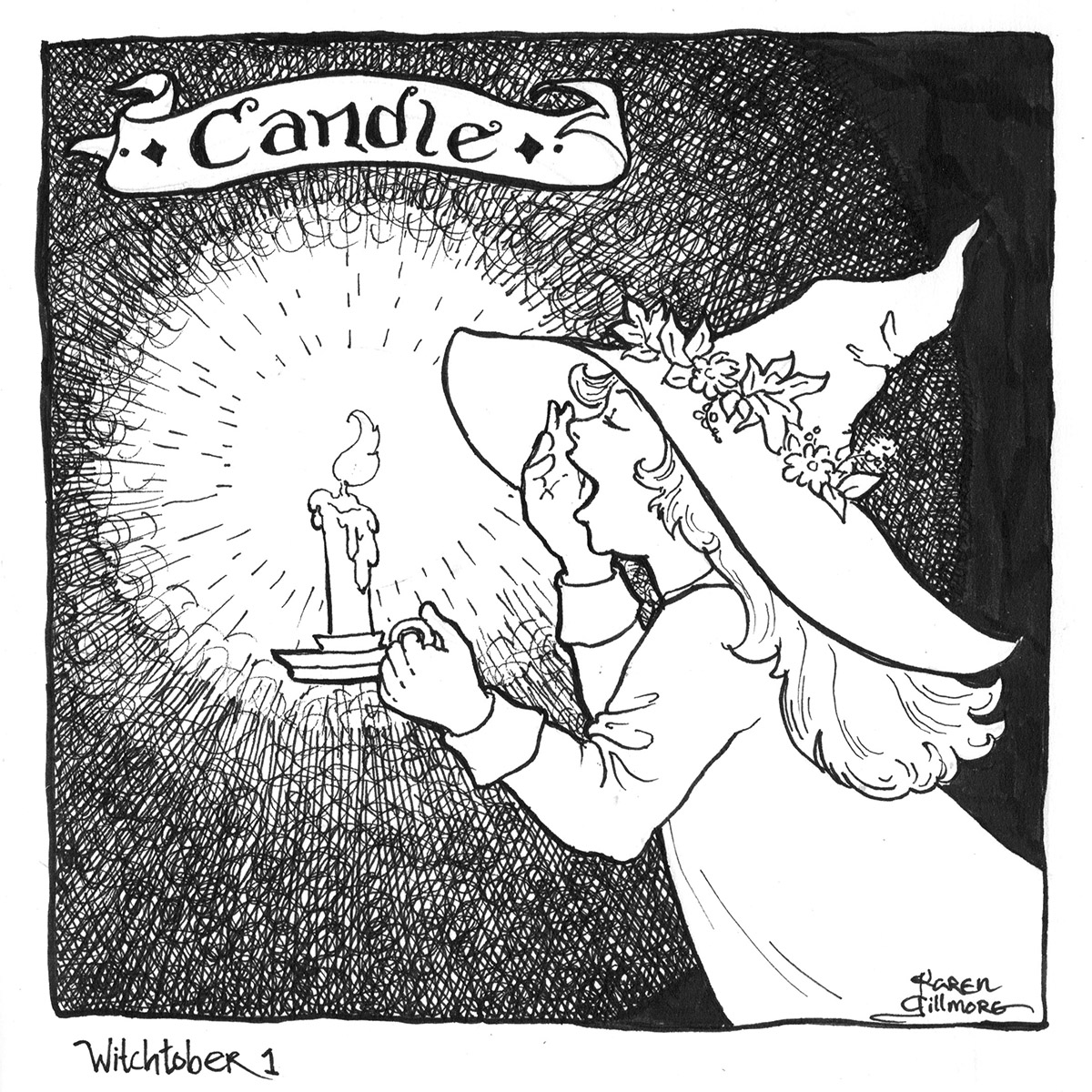 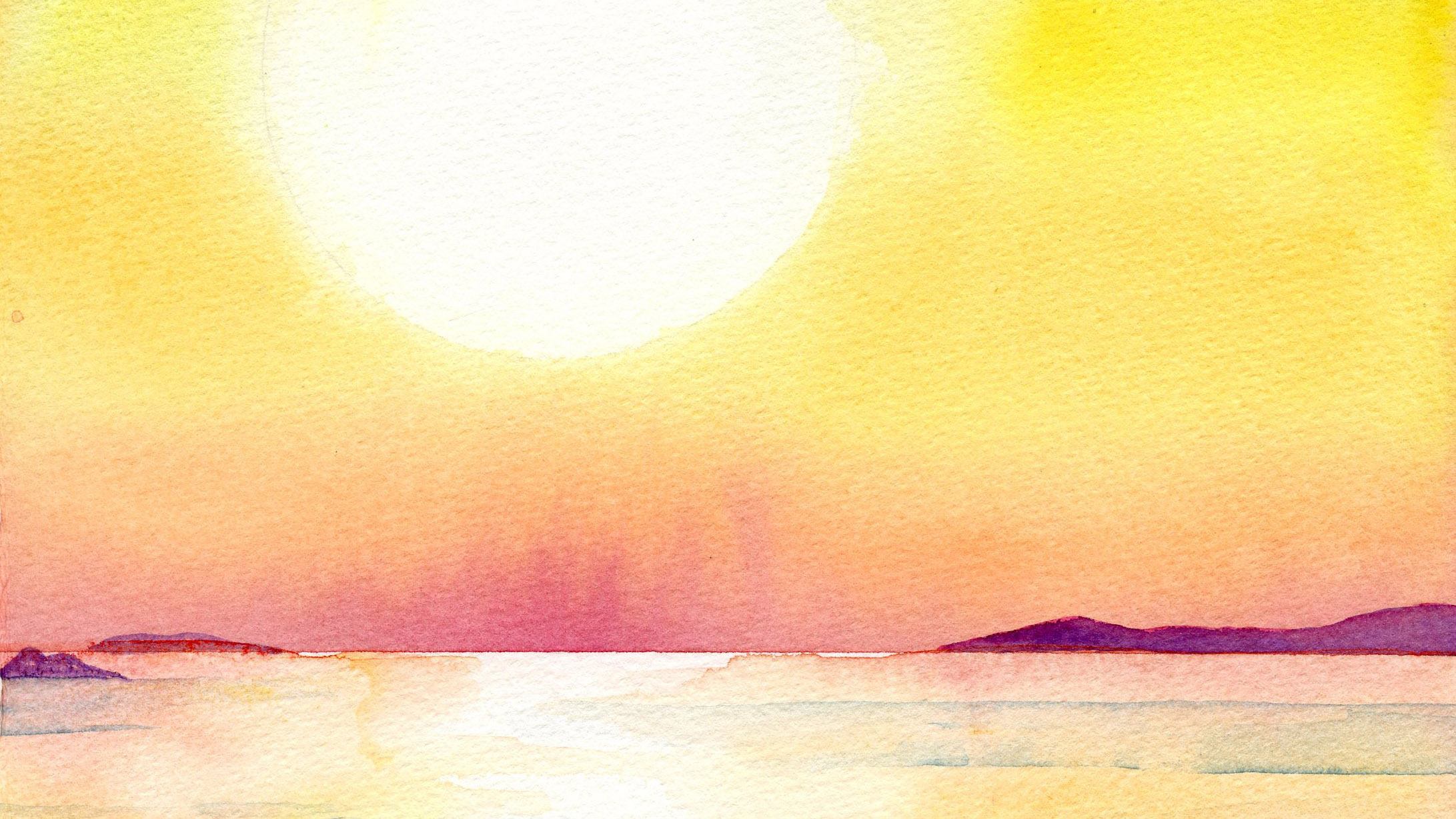 In trying to make sense of the last year in terms of my creative activities, I’ve realized how much the work I did became compartmentalized in terms of what was going on in the world at large. The first part of the year (recounted in my previous post) was very much influenced by a continuing […]