Hello readers, just a quick post here to let you know what’s going on. I’m forced, with much blushing, to admit being human (not that I’ve been posing as a mermaid or anything). My superpowers seem to be on the fritz right now, and I have been too ill all week to do much art. With much regret, I’m going to switch back to a once-a-week schedule for a while to give myself time to heal and address some long-term health issues. The story will continue, though — I have so much good stuff planned! I will post weekly on Monday mornings, beginning this Monday, and hopefully resume the twice weekly postings within a month or so.  Thanks for sticking with me, and Sami and the crew! 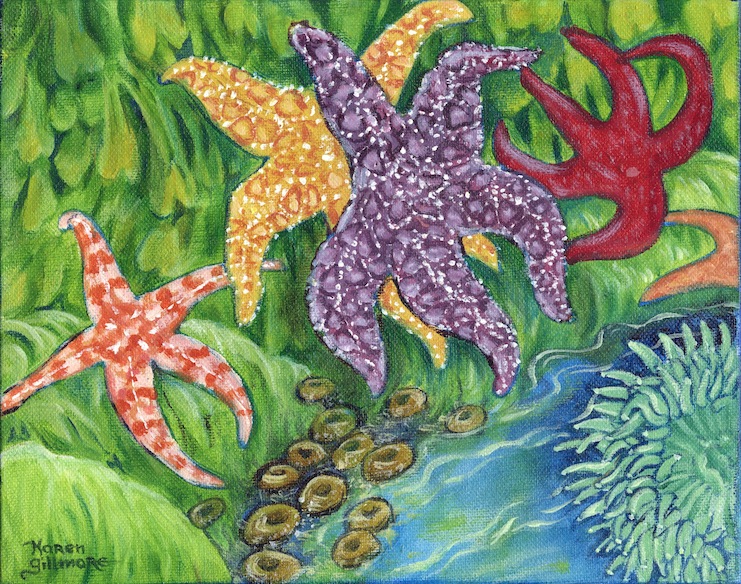 Here’s a bit of my past seashore art to keep you in the mood!
“Dancing Starfish” — acrylic on canvas

I’m about to set sail (on a ferryboat) to the great dry inland of BC, and fear that I may have to leave you all high and dry on our story until next Tuesday — I’m setting off with two partial pages, but then I realized that I will probably have no way to scan them and send them off to you. Arrrgh! So next Tuesday (August 18), the winds being willing, I will post the next two pages at one time — so be sure to check them both and find out why Hart Jones feels he must feed the mermaid a libation of grog!

And what exactly is grog, anyway? According to the Wikipedia article on the subject, it was a drink made with water or “small beer” (a weak beer), lemon or lime juice, and rum, to help combat scurvy. Nowadays, however, it can refer to any alcoholic drink.  Aboard The Mermaid, scurvy isn’t so much of a worry, because she is a coastal vessel in a mild climate, able to get plenty of fresh fruit and veggies (and Cook makes sure of that) — so they have their own grog recipe that they like, made of cider infused with spices that they trade for in the Southern Isles. It’s not always the same, but Cook makes it with a medium-sweet cider (did you notice all those barrels down by the galley?), sticks of cinnamon, star anise, cardamom pods, ginger root, and cloves. He makes a big batch of concentrated syrup using the spices and some fresh squeezed cider (so no alcohol yet) by heating it in a kettle. He bottles it up and seals it, then he adds the spice infusion to the hard cider when he taps it. If they have lemons and lime on board, he adds a squeeze or two to taste. Mmmm!

Hello, loyal followers! I have a confession to make — It has somehow gotten to be Thursday night, and I’m a bit behind on tomorrow’s page, due to, well, life, and summer, and so forth (imagine me looking rather sheepish here).  I spent so long perfecting the script that I’m now making up time to create a proper backlog of pages so they will all come out on their proper dates at 6AM PDT (do any of you really get up that early? Of course you do, some of you are even on different continents!). Please know that I am now in Painting Like The Wind mode, and will have tomorrow’s page out… tomorrow. Just not at 6 AM. Sometime tomorrow.

But in the meantime, in case you are going away for the weekend and will miss tomorrow’s page, and will pine away, not enjoying your vacation unless you know what is going to happen, here is a rare look at my inked version, before I slather watercolour all over it! Kind of has a minimalist charm, doesn’t it?

Page one of Chapter 2: Pigma Micron pens on Opus Watermedia paper. Sami is still mesmerized by what she has seen in the water!

We’ve been snowed in on the southern tip of Vancouver Island, Canada, for most of the week. It’s been colder than I can remember it being in 30 years of living here, and there’s nothing like being cooped up inside with the cats, my sweetie, lots of goodies, and a ton of creative antsy-ness. I’ve […]