Today begins a three-part series about how our mer-folk, the Hands, came to be. I’m posting this in lieu of comic updates for today and the next two Mondays, partly because it’s a good time to add this to the story, and (full disclosure) partly because I’m working to deadline on a book and need to be free to work on only that for the next little bit.

So grab a cup of tea, and imagine that you are a friend of Gull’s and Whelk’s when they were wee ones, listening to an age-old story, told once again…

Gather round close, my little ones, it’s time you learned the history of your people. Not quite that close, Whelk, you’re sitting on my tail! Gull, leave that poor eel alone! Squid, dear, stop pulling Limpet’s hair, it’s not nice. And stop squirming, you’re stirring up the silt and it’s getting in my gills!

All right, is everyone settled? Good. Now listen closely, for someday you will tell your own children this story, for it must never be forgotten. You will hear this many times as you grow, and when your time comes for choosing a name, you must be able to tell this as I, Saleeka, tell it to you, as I heard it from my mother Mareela, my father Doonri, and my Auntie Kareesh.

Long and long ago, we walked upon the land on two tails, like the land people do now. But a bad, hard, sad time came upon the land-dwellers, and the people hid in the sea, in giant bubbles full of air that they attached to the sea-floor.

What caused the hard time, Squid? Well, there were too many of them, for one thing; they had killed all the land-sharks and land-kraken, and there was nothing to eat them. So they crowded the great islands and the shores until they were fighting for space to hunt and grow their gardens, and they grew ill from the closeness, and many died from the fighting and disease and starvation. But still their numbers grew. Their fires made the air hot, and made the sea warm so that all the ice on the cool ends of the ocean turned into water. The sea and the air became angry, and the sea swallowed the people nearest the shore, and the air became a vast wind and swept the people off the land.

Some of them had time to prepare, and as I was saying, they moved to the depths, where the waters were still cool and calm. They looked out of their bubbles and wept for their lost homes.

Most were waiting until the land was safe to walk upon once again, but there was one bubble city on a beautiful, fertile reef that was different. The people of that bubble, a tribe of mighty singers and makers, looked around them and saw the abundance of the sea, and wished to be part of it. They had powerful magic, and used it to transform themselves into beings who could live in the sea.

Many generations passed before they had perfected their new forms, but at last the youngest were ready to set off into the deep and explore their new world. Meanwhile, the other bubbles had been abandoned, having served their purpose as temporary refuges, locked up and becoming the heart of new reefs.

The new sea people encountered the ships of the newly returned land-dwellers. But they found that they could not talk to them, although they could hear and understand them; in the changes that had been wrought so that they could live underwater, they had lost their voices, and could only speak mind-to-mind with memories of the sounds the sailors used, the same that their ancestors had spoken.

The sailors on the ships would sing as they raised their anchors and tended their sails, and the young sea-people longed to join in, for the music of their singing ancestors was in their souls, but they were mute, and could only sing in their minds.

And so they returned to their home bubble to ask for their voices back. But some years had passed, and they found it abandoned, its lights extinguished and the inhabitants gone, leaving no message or clue as to where.

What, Whelk? What happened to the bubble people? We don’t know — that’s one of the puzzles that you may one day solve when you grow big! 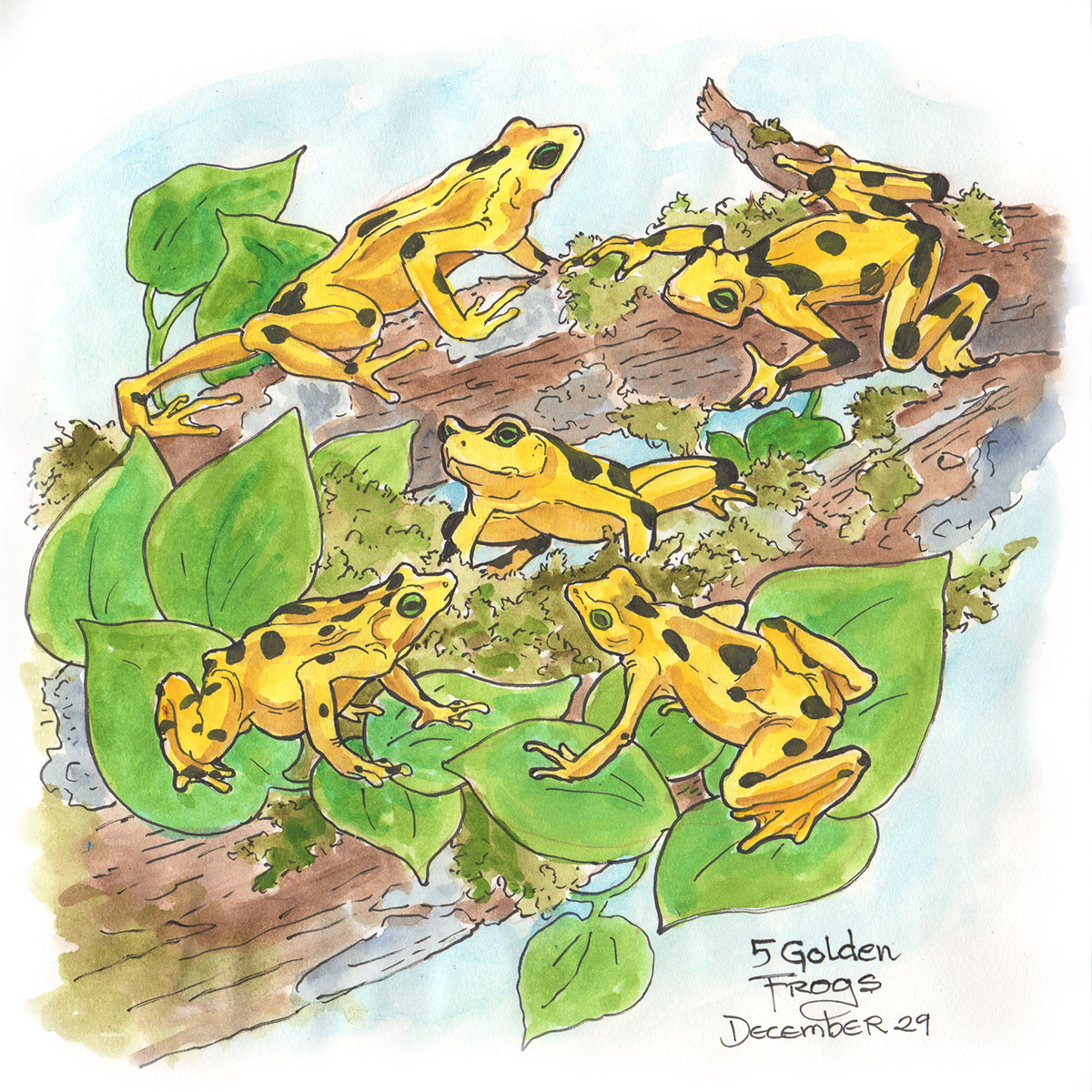 Just before New Year’s, I posted about the 12-day challenge I was doing in the Zooly Weekly Art Challenge group, where we normally have one animal prompt a week. This one was a modified 12 Days of Christmas, and those few of us who participated had so much fun with it, someone is already working […]

Art in the Quarantine Age

What a year it’s been! Like everyone else, I’ve seen a lot more of my house this past year than usual. Although I’m usually home quite a lot, since that’s where my studio is, I’ve come to realize that I wasn’t as much of a homebody as I thought. Such weekly routines as swimming and […]

There is something to be said for the old-fashioned observance of the 12 Days of Christmas, or Twelvetide. It has a fascinating history, which I won’t go into here, because you can look it up yourself and go on your own internet rabbit-hole adventure — but in practical modern terms, it makes a lot of […]